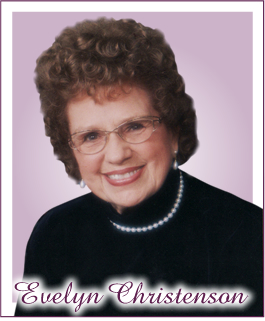 Evelyn Christenson was a prayer seminar speaker and teacher for 40 years in all 50 U.S. states and for 26 years extensively in person on every continent with attendees from all races and ages and most Christian denominations.

She authored numerous books beginning with the now classic What Happens When Women Pray that has sold more than 3 million copies. A Study Guide for Evangelism Praying, initially published in 1992 as the curriculum for AD2000 Women International, and its companion book, Praying God’s Way (formerly titled A Time to Pray God’s Way) are still used today around the world as teaching curriculum. The Study Guide was published in over 60 languages.

Her second book, Lord Change Me! has sold over 2 million copies. Other books include Gaining Through Losing (voted as the 1982 top devotional book by the Evangelical Christian Publishers Association), Battling the Prince of Darkness, What Happens When We Pray For Our Families, What Happens When God Answers, What God Does When Women Pray and the prayer journal, Prayers and Answers. Evelyn’s two daily devotional books are: A Journey into Prayer and A Journey into Spiritual Growth. Her children’s books include: My First Journal of Prayer and What Happens When Children Pray (selected as runner-up for best children’s book by the Evangelical Christian Publishers Association).

In 1972 Evelyn founded and served as president of United Prayer Ministry (UPM). It focused on board members praying for her teaching and over 25 years of broadcasting into India, China, South America and the Caribbean through Trans World Radio. Evelyn served as a founding member of the National Prayer Committee for over 30 years. It initiated and sponsors the National Day of Prayer state-wide and on Capitol Hill in Washington D.C. Working with the U.S. President, Congress passed its date legally for every first Thursday of May. Evelyn has been a frequent speaker and prayer leader at this event. This committee also produced the current Global Day of Prayer, which in 2006 connected 250 million Christians by satellite, television and radio praying in their time zones around the world. Evelyn was a member of the world-wide directors’ founding committee of the ten-year AD2000 International Women’s Track. As Chairmen of its North America division (incorporated as Christian Women United of the U.S.), she wrote their international curriculum and taught around the world. She also served on the Mission America committee, and was on the founding advisory board for “Pray!” magazine, plus numerous national and international endeavors.

Evelyn’s ministry exuded her urgency and passion for evangelism praying so that people will be won to Christ, thus being transferred from Satan’s kingdom to Jesus’ kingdom eternally.

Evelyn went home to be with her Lord Jesus on 1-1-11, All Saints Day. She left her family peacefully and told them minutes before she took her last breath that Jesus was holding her by the hand.